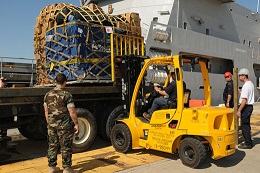 For any logistics company to be successful a solid operations will be the backbone. And this is why we are so concerned with why our potential members have a strong operations capacity. And it doesn’t matter how big or how small the forwarder is nor what kind of cargo they specialize in. Two things are needed: Efficiency of their systems and effectiveness of their outcomes.

Though these two go hand in hand it is not true that you can’t have one without the other. For example, you might have a highly qualified forklift driver at your company. He does the job faster, neater and with more expertise than anyone else in your warehouse. But he won’t be very effective if he comes to work one day and you tell him that today he is now a crane operator.= (Besides that, depending on where you are, it would probably break all kinds of safety regulations and occupations statutes to boot!) So we might say that efficiency is the product of your operations staff doing their jobs in the right way. If you want them to be effective, then they need to be doing the right things to get the job done professionally.

So now you know that we are looking for companies who are doing all the right things the right way. That is pretty much a no brainer. But without years of watching these companies what then can we look to to point us in the right direction?

For efficiency you need systems, for effectiveness you need expertise and for both you need leadership. I consider all of these team efforts as far as logistical operations go.

Efficiency can be achieved by putting in the right system to get the job done. It requires everyone operating within this system and following the system. Weak links in this chain will bring everyone down. It will cost both their company, the companies agents and customers money. And no efficient system is ever static. It adapts and changes as the needs of the freight company and the cargo it handles and ships changes. Every member of the team will need to be flexible as well in order to adjust to the new reality.

Effectivenes comes from experience. I’ll back up on this one because training can definitely play a role in this, but I personally believe that if you asked a customer who he’d rather have handling his speciality cargo, the novice with a degree in logistics from a famed maritime academy or the expert with no degree but two or three decades handling special cargo, well, that’s not a crap shoot. The expert wins hands down every time. It is this experience which tells the key staff members exactly what needs to be done in preparation, what needs to be done during the operation, and what needs to be followed up on later. It is indespensible. In small companies the experience generally comes from the top, from the owner, but as companies grow the number of old salts need to trickle down into the line operations staff.

I know that I capped it off by saying that all of these attributes require leadership, so let me shuck down the corn on that yarn a bit.

In operations it is important that on the day-to-day job the leaders should lead from behind and let the team get the job done. However, when the job becomes critical and problems arise (as is inevitable) then the leaders should lead from the front, like an officer on the battlefield. (Don’t worry. I’m not trying to be melodramatic here – just trying to give an apt comparison.) When operations managers and executives work in this way the team will be cohesive and the customer will stick to your company like white sugar on a funnel cake.