When networking, be the tortoise. 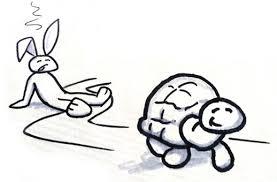 When networking, be the tortoise.

So many people are bad at networking because they lack one thing: patience. They want the biggest bang for the buck. They want to double and even triple their investment when joining a group. But networking, and especially logistics networking, is in many ways an intangible. You can make up reports over a period of time of how much money you get from business done with partners in such and such network but that doesn’t tell the whole story. You would be fooling yourself to believe that this is the only benefit you get from networking.

If you were to ask me whether networking falls under sales or marketing I’d tell you that it is a function of both, though in most cases I would say it is a bit more on the marketing side of the house. Why? Because even though you are selling yourself every time you are networking with a new contact you are should be working on where to place your company in their mind. On not so rare occasions they might have some business you could quote on right away but more often than not chances to quote and actually get the business don’t start until further on down the line. Also, even after the business has started it is still very likely that even more time will have to be taken to get the business strong enough, big enough, frequent enough, profitable enough, etc., that it is substantial for both sides.

Everyone has heard the old parable about the tortoise and the hare (or the turtle and the rabbit, as I have heard in more modern versions of the story). We’ve also heard one thousand and one times that sales people are divided between those who are hunters and those who are farmers. Well, networking is the tortoise and networking is the farmer. Those times when you “luck” upon ready business are simply the result of timing. Networking works best as an investment rather than a loan or gamble. If you think that you are going to drop in $100 and pull back $200 right away then you have the wrong idea.

The networking model fits more closely with the dollar cost averaging profile when you invest a bit steadily and over time the return grows in compound interest from almost nothing until it is quite substantial. If you decide to invest in stocks do you pull your money out after one year expecting 100% return? No, you don’t. You are looking at the long term. Networking is the same. You aren’t selling ice cream on the street corner. You are selling a service which is difficult to quantify and qualify for those who only just met you. Commitment is required. Time is required. Patience is required.

When people ask me how long it takes to profit from joining a network I would tell people to ready themselves for three years of investment. This is my experience from both sides of the coin. I’m not simply talking about the network subscription. And I’m not even talking about making the meetings (which, I might add, if you skip then you are throwing your own money away). The true benefit is only reaped after you have made your contacts, cultivated them, stuck your toes in the water, waded in, then finally dove in. It takes a while to build up contacts and then to build trust in the contacts. But when you put the time and effort you will wake up one day to find that these aren’t contacts anymore. They are partners. And their profit is more than just monetary. They provide camaraderie and in many cases, close friendships as well.

Does it sound to good to be true? It’s not. Just ask the tortoise.

Gary Dale Cearley is the Managing Director of Advanced International Networks Ltd. (AIN), one of the fastest growing and most dynamic business-to-business networking organizations in the world. AIN’s networks include AerOceaNetwork (AON), XLProjects Network (XLP), and AiO Logistics Netowork (AiO). Gary Dale has been in many facets of international freight forwarding for more than two decades from operations to sales to the owner of the first 100% foreign owned freight forwarding company licensed in Vietnam. The companies that he has been involved with have been both generalists and specialists. He has also worked from large European and Asian multinationals (Danzas and Hankyu Express) as well has small start up forwarders. For the past ten years Gary Dale has owned and operated AIN. He has lived in several major cities in four different countries and he is multilingual. Currently Gary Dale runs the AIN operation from Bangkok, Thailand, but travels the world over. Gary Dale welcomes all sorts of interactions. If you have questions or comments about anything Gary Dale has written here you may contact him directly by e-mail.